To the Moon – Dr. Zodiak’s Moonrocks Is Going National and Beyond 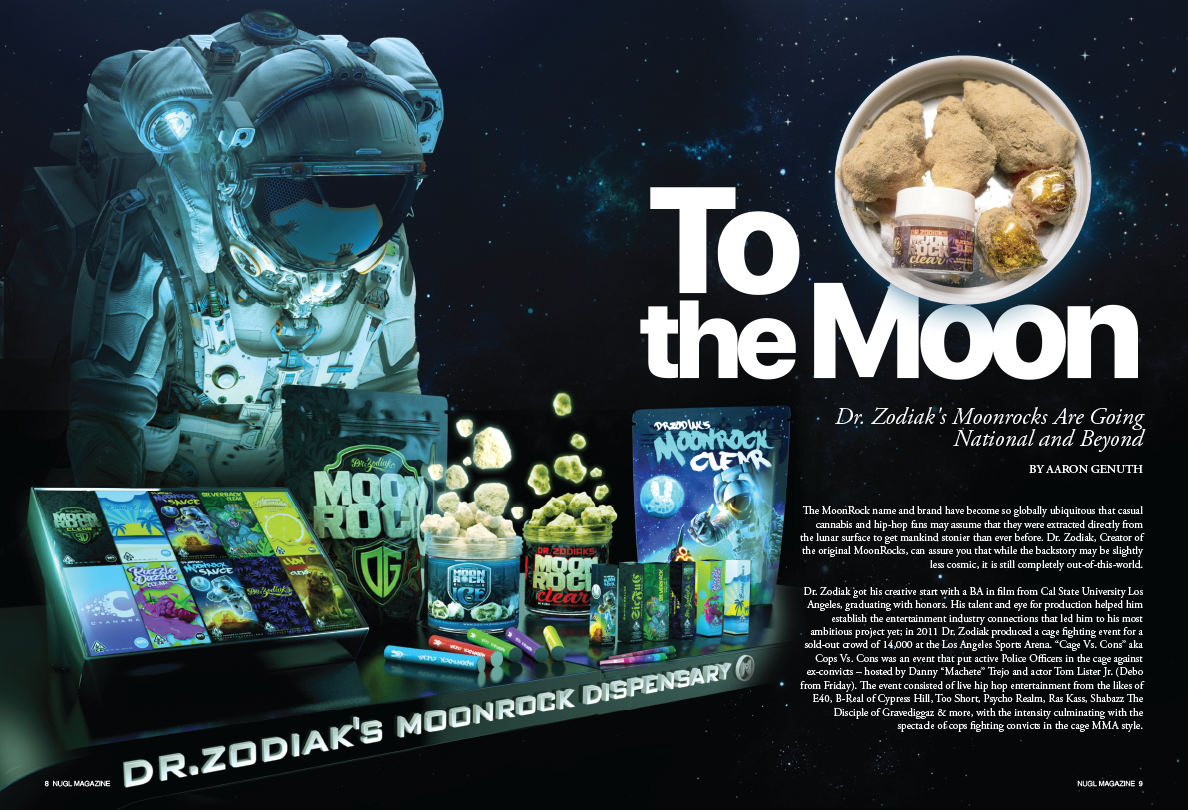 The MoonRocks name and brand have become so globally ubiquitous that casual cannabis and hip-hop fans may assume that they were extracted directly from the lunar surface to get mankind stonier than ever before. Dr. Zodiak, Creator of the original MoonRocks, can assure you that while the backstory may be slightly less cosmic, it is still completely out-of-this-world.
Dr. Zodiak got his creative start with a BA in film from Cal State University Los Angeles, graduating with honors. His talent and eye for production helped him establish the entertainment industry connections that led him to his most ambitious project yet; in 2011 Dr. Zodiak produced a cage fighting event for a sold-out crowd of 14,000 at the Los Angeles Sports Arena. “Cage Vs. Cons” aka Cops Vs. Cons was an event that put active Police Officers in the cage against ex-convicts — hosted by Danny “Machete” Trejo and actor Tom Lister Jr. (Debo from Friday). The event consisted of live hip hop entertainment from the likes of E40, B-Real of Cypress Hill, Too Short, Psycho Realm, Ras Kass, Shabazz The Disciple of Gravediggaz & more, with the intensity culminating with the spectacle of cops fighting convicts in the cage MMA style.

It was at that event that Doctor Z met Kurupt and launched the MoonRock empire with their first line, in 2013. The original MoonRock method involves glazing top shelf indoor flower in cannabis oil (live resin) and dousing it in golden kief, leaving a product with insane 50% and higher THC levels. Though often imitated, no one has managed the viral and global marketing success of Dr. Zodiak’s original product, which has now won multiple High Times Cannabis Cup and other prestigious industry awards.

When rapper and long-time weed lover Snoop Dogg first tried Moon Rocks, he used social media to express his love for the product. He promoted it heavily on his Instagram and Youtube, introducing the phrase ‘MoonRocked out’ while clowning on friends like Bow Wow passed out in his studio, and Wiz Khalifa passed out at the airport after overestimating their tolerance for that massive dose of THC. From there, the brand went global, now stacking up over a BILLION YouTube views combined, through songs that include mentions and praise for MoonRocks. Artists who have shouted out MoonRocks include Cardi B, who said, “I’m moonwalkin’ in the 6, sticky with the kick, MoonRocks in this b–ch” in her hit Bartier Cardi. Snoop Dogg (of course), Kodak Black, XXXTentacion, 2 Chainz, Juicy J, 21 Savage, Nav, Juice WRLD, Mobb Deep, Roddy Ricch, Lil Uzi Vert, Brotha Lynch Hung, Money Man, Yung Lean, and the legendary Wu-Tang are just some of the influential artists who have spread the massive global impact of – and hunger for – MoonRocks. At this point, Dr. Zodiak’s only barrier to the massive global market hungry for his products is the remaining anti-business, anti-science, and anti-human laws that still restrict cannabis from the vast majority of his fans.

Though they aren’t yet reaching every market that they hope to someday soon, the anticipated re-launch of MoonRocks in California is now in full effect, as Dr. Zodiak describes. “We’re partnered with Sea Bright Farms located in Long Beach and are servicing dispensaries throughout California with MoonRocks, MoonWalk, Dr. Zodiak & MoonRock pre-rolls, Megablunts, and introducing new products as well, like Dr. Zodiak’s MoonRock Sauce Carts, Bobby Blues Brownies, Silverback, Razzle Dazzle, Lynwood Lemonade, & Lion Heart Clear.” Doctor Z also teases the upcoming launch of MoonRock Ice – which will replace the kief that the rocks are usually rolled in with pure THC-A. All of these new products coming out wouldn’t be possible without my Visual Blast & MoonRock Family hitting the pavement hard, daily! He and his team are also building partnerships across the country, in legal markets that now include Arizona, Massachusetts, Nevada, Oklahoma, Florida, and Michigan. They hope that Washington D.C. will cooperate with their national goals for themselves and cannabis access. “I’m hoping this year for a bill of federal cannabis legalization.” Dr. Z optimistically predicts. “I think we’ll be able to get more of the states and all the country legal very, very soon because there’s demand in every state and every country worldwide.” He hopes the effect that music and popular culture have had on the demand for cannabis – and specifically MoonRocks – will help them achieve the ultimate goals they knew were realistic since Snoop Dogg’s videos and their brand first spread from Southern California across the entire world. “Our main goal is going GLOBAL, PERIOD, and we will do that by partnering with the solidified manufacturers and distributors worldwide!” Recognizing that the legal access to cannabis markets and products are closer than they’ve ever been, Dr. Zodiak credits music as a path toward MoonRocks place in the spread of cannabis culture; “I feel like music was a big part of the push for the legalization of marijuana. And I think music and weed go hand in hand. There are many supporters of marijuana in the music community and the hip hop community, and that’s pushing the whole world to legalize it.” With millions of fans worldwide, and a growing American market eager to enjoy the products they’ve been rapping about for years, the future outlook for MoonRocks is bright and hazy.

Cannabis businesses and entrepreneurs interested in Dr. Zodiak’s MoonRock for out of state licensing, or to carry MoonRock products in dispensaries, please call 800-420-6957 or visit MoonRocks online at www.ZODIAKSMOONROCK.com

Man on a Mission

The Shelf Life of Cannabis & Effects of Light and Air

by Adam Merckle Exploring the Effects of Light and Air It is a well-known fact that cannabis needs light and airflow to grow, but what about after it's...
Products

System of a Down: Combining Music & Cannabis With 22Red

Written by: Alexa Oliphant // Few pairings are more powerful than cannabis and choice music. Happily, combining the two couldn’t be simpler for...
Products

The Best Ways to Roll a Joint

A filter and ground marijuana are mixed with a thin, translucent joint paper to create a joint. A high-quality joint paper should be chosen....
Products

https://vimeo.com/647892836 Alan Hoskins, founder, and owner of RA' Flower Brands (raflower.com) joins us in a special Las Vegas edition of NUGL Live with Jessica where...
Products