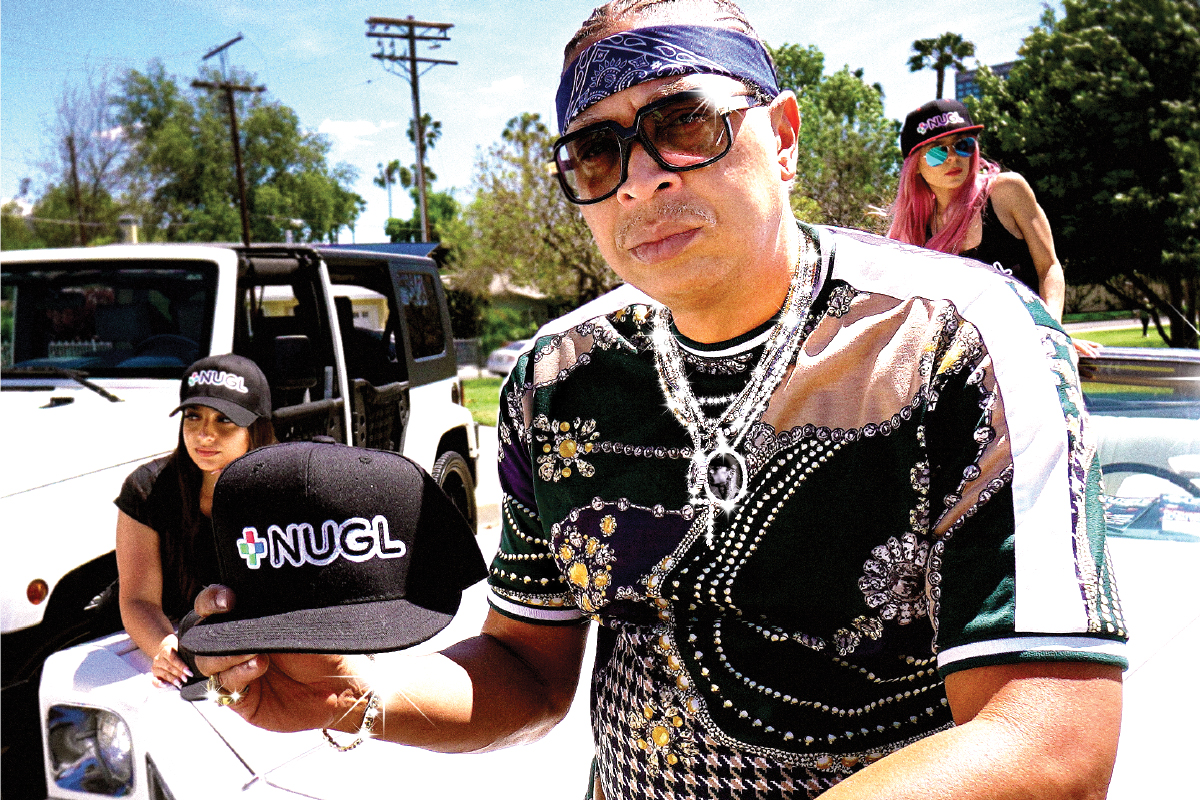 Big Percy is a force in the music industry who built his career by bringing some of the most notorious gangsta rappers in the game to mainstream America. Now, he’s set his sights on his biggest challenge yet: bringing cannabis culture into popular consciousness.

Big Percy has never been one to shrink from a challenge. He’s a mover, a shaker, the one leading the pack. It’s just part of who he is, and it’s served him well: his influence and strategic vision have allowed him to position his clients in the hearts, minds, and lives of mainstream America.

It’s that kind of authenticity and interconnectedness is what Big Percy aims to bring to his work with NUGL. Cannabis and social media might seem like an offbeat combination, but to Big Percy, it’s right in time. “Cannabis is a way of life,” he says. “It’s a lifestyle. Every asset and every facet of the world, every sector of the world, has something to do with cannabis.”

He makes a good point: the history of cannabis use by humans can be traced back all the way to 8,000 BCE, on the Oki Islands near Japan. Since that time, cannabis (as both the familiar marijuana plant and newly-hyped hemp) has played an important role in societies all over the globe. The legal market for cannabis is new, but the plant itself is, in a way, older than some of our most cherished parts of our humanity, like complex societies or even written language.

Viewed through that lens, bringing cannabis into the mainstream doesn’t seem like such a tall order. In fact, to Big Percy, it’s a necessity. “Me, my team and everything else, we’ve always been a part of it, but now we’re really stepping into the forefront.”

NUGL is certainly a part of that plan, but it’s not the only aspect of Big Percy’s Plan. Ask him what he’s working on, and he’ll give you a list: “The CBD, the magazine line, NUGL, and some other good things” are in the works, and those are just the highlights. Big Percy has never been one for small thinking, and he doesn’t intend to start now.

His arrival on the NUGL Board of Directors may seem sudden from the outside – to be fair, it is his first board position – but in the context of Big Percy’s overall vision, it makes perfect sense. He explains his thought process behind teaming up with the brand: “NUGL was just a place I had to be, you know? It was on my table for a year and change now, being through BiggA.” That relationship allowed Big Percy an inside look at the nuts and bolts of NUGL as an up-and-coming disruptor of the cannabis and social media scenes.

“I watched what they were doing,” Big Percy says of that year and change NUGL spent on his radar before he came on board in earnest. “I watched how they moved. I liked the structure they had, and I liked the comfort level that they gave me to be myself and still do the other things that I was doing.” That independence is important to Big Percy and what he stands for.

If you ask Big Percy what he values, he’ll be straight with you. “Being a man of your word,” he says with gravity. “Always stepping to the forefront – fearless – and if you say you’re gonna do something, you must complete.”

That commitment to authenticity, tenacity, and unabashed boldness is a part of Bigg Percy at his core, and he aims to bring those values with him to his work with NUGL. It’s not a far reach: NUGL was founded for the purpose of serving the vibrant and diverse cannabis community, honoring the individuality of users while promoting collaboration and cooperation among businesses and consumers alike.

That’s a mission that Big Percy can get behind. To him, cannabis is already here for the long haul, and bringing it into mainstream focus is the next logical step in an increasingly friendly legal climate. The blossoming legal market has opened up new opportunities for innovation within the industry, and Big Percy believes consumers are hungry for the coming change.

For Big Percy, NUGL is about more than just launching an app or publishing a magazine. It’s an opportunity to challenge people’s preconceptions of what the cannabis community is capable of and what the place of cannabis within everyday life is. “Cannabis is here,” he says, “and it’s here to stay.” On what’s to come for Big Percy at NUGL, he has this to say: “Don’t watch me, watch the moves I make.”

https://youtu.be/QOIZnXJFIgo Welcome to "The Green Rush", a long-form interview with some of the most influential people in the cannabis industry. Hosted by Jessica Serrano: Growth...
Entertainment

NUGL is pleased to announce that Mike Tyson will be gracing the cover on the 2021 Buyer’s Guide, brought to you by NUGL Magazine...
Entertainment