Hall of Flowers Season 3: A Curated Collection of Cannabis Business 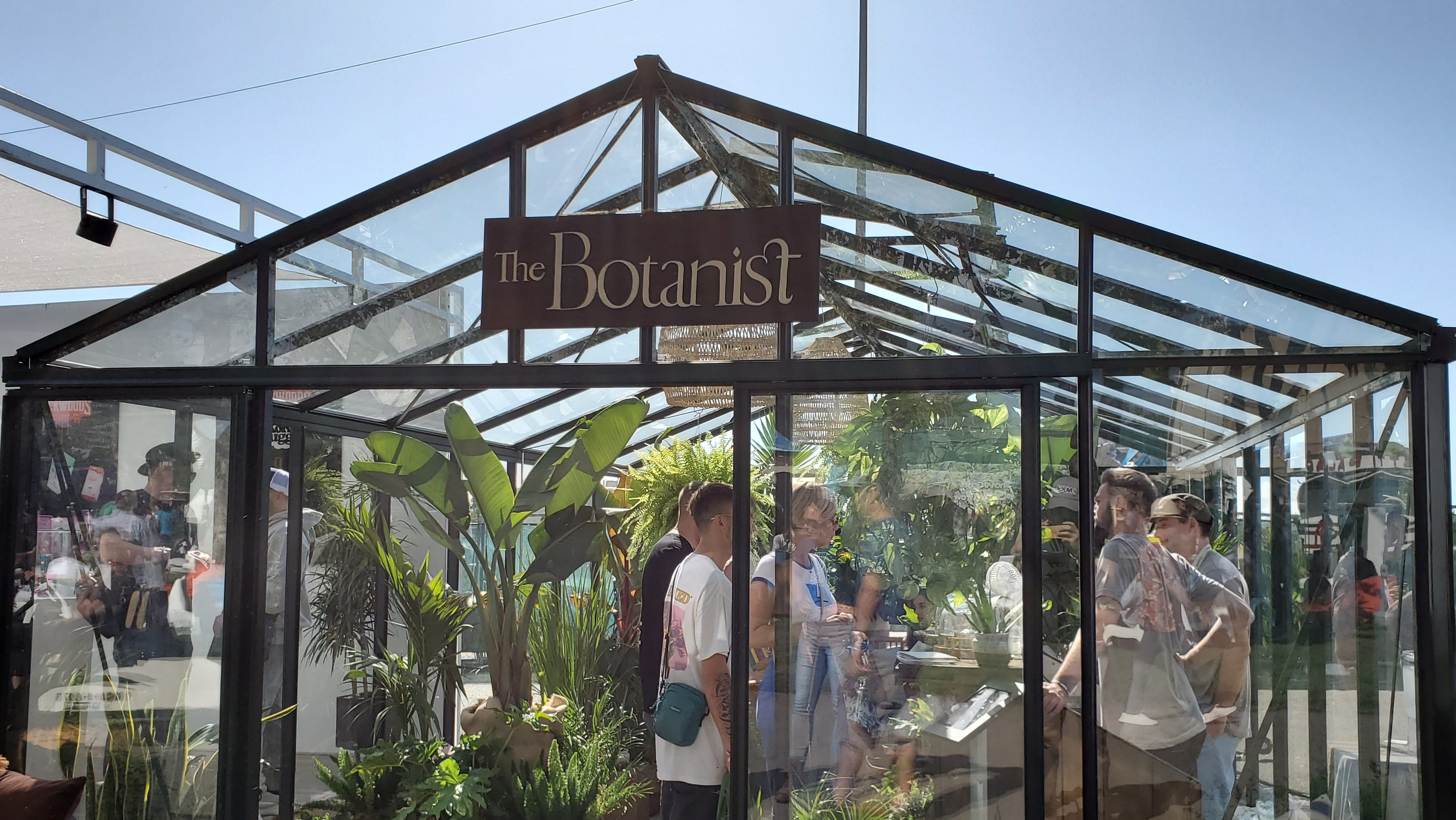 Hall of Flowers launched ‘Season 3’ of it’s wildly popular business-to-business cannabis trade show this September 18th. Launched in 2018, the event is produced by a team responsible for producing some of the largest and most popular fashion industry trade shows, including ‘Agenda?‘, and the curation and attention to detail they’ve brought from their fashion experience manifests throughout.

The production commenced again at the Sonoma County Fairgrounds – the site of many larger events, including the annual Sonoma County Fair, which drew over 125,000 people this year, as well as many large cannabis industry shows and festivals. Hall of Flowers presents a much more intimate setting for direct business to business cannabis sales and networking, with about 6,000 industry attendees over the two days.

NUGL was on hand for the business action and festivities, and in between learning about exciting new products and innovations within the industry, meeting and connecting with some of the most creative and innovative minds and personalities in cannabis, and of course enjoying some of their creations and innovations, we also managed to talk to some folks about their products, work and experience at Hall of Flowers.

It seemed like everyone at the event stopped in at the Sonoma Pacific Outdoor Lounge. A big and welcoming tented area in a prime location with plenty of comfortable seats in the shade, it was impossible to miss, and difficult to pass up on two straight warm and sunny days. A dazzling floral arrangement by ?California Sister? featuring carnations, magnolias, and of course, cannabis made it that much easier to oblige the welcoming vibe. Once settled onto one of their many sofas, one could enjoy a regular stream of prerolls, dabs, accessories and swag from brands like Zkittles, ?Medicine Box?, and Big Sur Extracts, with help from their dispensary partner Heritage Mendicino, who facilitated the sampling.

Brit June, Director of Brand Relations for Sonoma Pacific, told us that a successful multifaceted production like the lounge that she helped to create is reflective of the ethos and mentality of Hall of Flowers as a whole. “The experience from the fashion show world, and implementing that into cannabis curates something that’s pretty special and doesn’t really exist in terms of that structure and attention to detail. It seems they have a criteria they’re trying to meet, not just internally, but in terms of progressing and directing the community while creating an environment thats super-friendly and very experiential”.

Another of the uniquely enjoyable experiences was Hall A, which ?featured a group of ‘arena booths’, where brands got the chance to operate a pop up shop style experience and exhibit. Showcasers included industry stalwarts like Lowell Farms and ?Rebel Coast? Winery, whose cannabis infused non-alcoholic beverages (?enjoyed ?by 2 Chainz) pair nicely with their non-infused, alcoholic Sunday Funday Sauvignon Blanc.

The trippiest booth in Hall A surely belonged to Pluto Extracts, whose pop-up featured an outer space inspiration and aesthetic that went right down to the NASA suits the brand reps were rocking. The thousand or so who lined up for a chance to check out their extracts and interplanetary display were inspired by the aesthetic design of the Hanu Stone vape carts they’ve launched their first extract pod with (rated for ‘space flight’ on the package, which is an accurate description of how far we blasted off). Co-founder Lincoln Barnett III was actually one of the first several employees of Hall of Flowers before they launched, and curated the initial 80 brands of the 2017 opening season. After participating in the first two iterations, he took a step back from direct production involvement to launch the Pluto cannabis experience. When he and co-founder Michael Garganese Jr. launched their brand, they conceived of Pluto with its position as the farthest planet (or ‘?planet?’) from the earth, as what they call a ‘scenic balcony from which to observe time and space’. “We’re really focused on the visuals and art behind our world, and how we can continually adapt and manipulate that to create experiences, both digitally and in person.” Barnett says. He has been working in the cannabis space since 2009, and his journey so far has taken him from learning to cultivate in his garage in Orange County to working with some of the biggest talents in cannabis, and now all the way to Pluto. Pluto’s immediate plans are to continue to collaborate with the best growers and extractors they can find, and help fill the growing niche market for top shelf extracts created by specific artists and farms.

There were numerous inspiring socially beneficial innovations and brands, such as Brother David’s, a not for profit farm whose mission and structure their representatives Les and Bobcat likened to ?Newman’s Own?, and which was founded by Dr. Bronners Soap Company CEO David Bronner, a longtime supporter of cannabis, psychedelics and ?other cool things?. Brother David’s mission and commitment, according to their website, is that ‘all profits from Brother David’s go toward protecting the land, lives, and communities of our cannabis family — promoting small-scale family farms practicing regenerative organic agriculture, and fighting a system that unjustly criminalizes cannabis.’

The halls and grounds were filled with all manner of tasty and interesting treats and experiences. Cold Lagunitas HiFi Hops – a non-alcoholic ‘beer’ infused with 5-10 milligrams of Absolute Extracts were available, and the thirsty crowd kept them serving nonstop. Vacation, a new brand partnership between Green Street, Sublime with Rome, and Dirty Heads gained a lot of attention and at least one very happy and lucky customer with a $50,000 cash raffle. If you were wandering around the grounds on day 2, you may have even bumped into cannabis entrepreneur/consumer and actor/producer Seth Rogen (you probably didn’t, there were people around him. But still. ?Seth Rogen? was there!!). Award-winning chefs Mike Magliano and The Franks curated a culinary experience on-site called Pantry, and a Speaker Series hosted panels from Shep Gordon, Jim Jones, Coltrane Curtis, Bong Appetit’s Vanessa Lavorato, Miss Grass’ Kate Miller, and Van der Pop’s April Pride.

At the end of the two hazy days, Hall of Flowers showed once again how and why it’s one of the most engaging, enjoyable and buzzworthy industry events. This year marked the first time that the second day was open to the general public, so even more cannabis consumers, enthusiasts and aspiring entrepreneurs can stay tuned and look forward to experiencing Season 4.

https://vimeo.com/646607676 Welcome to a very special edition of NUGL Live at Kushstock 2021. Today, we feature Mel from Re-Up Supply, an artist and entrepreneur with...
Events

Welcome to another special edition of NUGL Live at Kushstock 2021! Today, we're featuring Kuzzo Fly & Yukmouth from The Luniz, straight out of...
Events

Welcome to a very special edition of NUGL Live at Kushstock. Today we are featuring David Kelly from STIIIZY, to chat about their award-winning...
Events

Welcome to a very special edition of NUGL Live at Kushstock. Today we are featuring Alex from Royal Blunts, to chat about their Royal...
Events